MINUTES OF THE EXECUTIVE MEETING HELD ON MONDAY 24 SEPTEMBER 2018 AT 9:04AM HELD IN THE CLUBS AND SOCIETIES CENTRE, ALBANY STREET, DUNEDIN

Dermot Frengley arrived at 9:07am

Moved from the Chair

476/18 THAT the above apologies be accepted.

MINUTES OF THE PREVIOUS EXECUTIVE MEETING

Moved from the Chair

477/18 THAT the minutes of the executive meeting held on 19 September 2018 be accepted as a true and correct record.

The question about tickets being limited was ruled out.

4. That section 2 be amended to include:

5. That section 39.7 (as it is currently numbered) be amended to read:

“Except as provided in section 39.5, in the event of a candidate being elected for multiple offices they will choose the office they will occupy and the next-highest polling candidate for the other office will be considered to be elected to that office.”

“If there are more than half “no confidence in these candidates” votes before any candidate votes have been transferred, then no-one will be declared elected and a casual vacancy will exist.”

“If there are less than half “no confidence in these candidates” votes before any candidate votes have been transferred, then “no confidence” will not be considered part of the remaining votes for the purpose of election under the STV system.”

“No candidate will be elected who polls lower than the “no confidence in these candidates” option before any candidate votes have been transferred. If as a result a position cannot be filled, a casual vacancy will exist. Up to three (3) casual vacancies may exist for the General Executive Officer position.”

9. That section 39.4 (as it is currently numbered) be amended to read:

“Notwithstanding anything in these Rules the person who is the subject of a motion of no confidence:

“The Secretary shall conduct voting on the motion of no confidence by secret ballot according to the voting provisions contained in section 50 except for 50.2. The execution of secret ballot shall be at the discretion of the Secretary, given that it is accessible, anonymous, and accountable.”

“j. The Pacific Islands Students’ Association President who shall be a voting Ex Officio member of the Executive.””

“The Pacific Islands Students’ Association Representative will present a report to the the Executive each quarter.”

“The Executive will present a proposed budget for the forthcoming year in a referendum or Student General Meeting to the Student Body in the second semester of each year.”

“There will be at least one Referendum called in the second semester which, without limiting its business, will:

“The Executive will set a period to hold elections preceding the year in which the next Executive is to hold office in the second semester of each year.”

a. In the second semester of each year, and;

b. Within one (1) weeks of the day and month the election was held in the preceding year.

17. Should students in their final year of undergrad (finalists) be allowed to vote for the position of Postgraduate Officer in Executive elections?

18. Except for the OUSA President, should current Executive positions be removed and replaced by nine (9) General Executive Officers?

19. Should OUSA withdraw its membership of the New Zealand Union of Students’ Associations?

20. Should OUSA hire a staff member with expertise in lobbying and campaigning?

21. Should OUSA lobby the University for the exam’ timetable to be released earlier?

22. Should OUSA lobby the University change the semester duration to only 12 weeks of lectures, to ensure a 2 week mid-semester break?

This budget has been through extensive discussions at FEC etc.

479/18 THAT the following proposed budget be put to the study body in its entirety at the Referendum being held 8-11 October 2018. 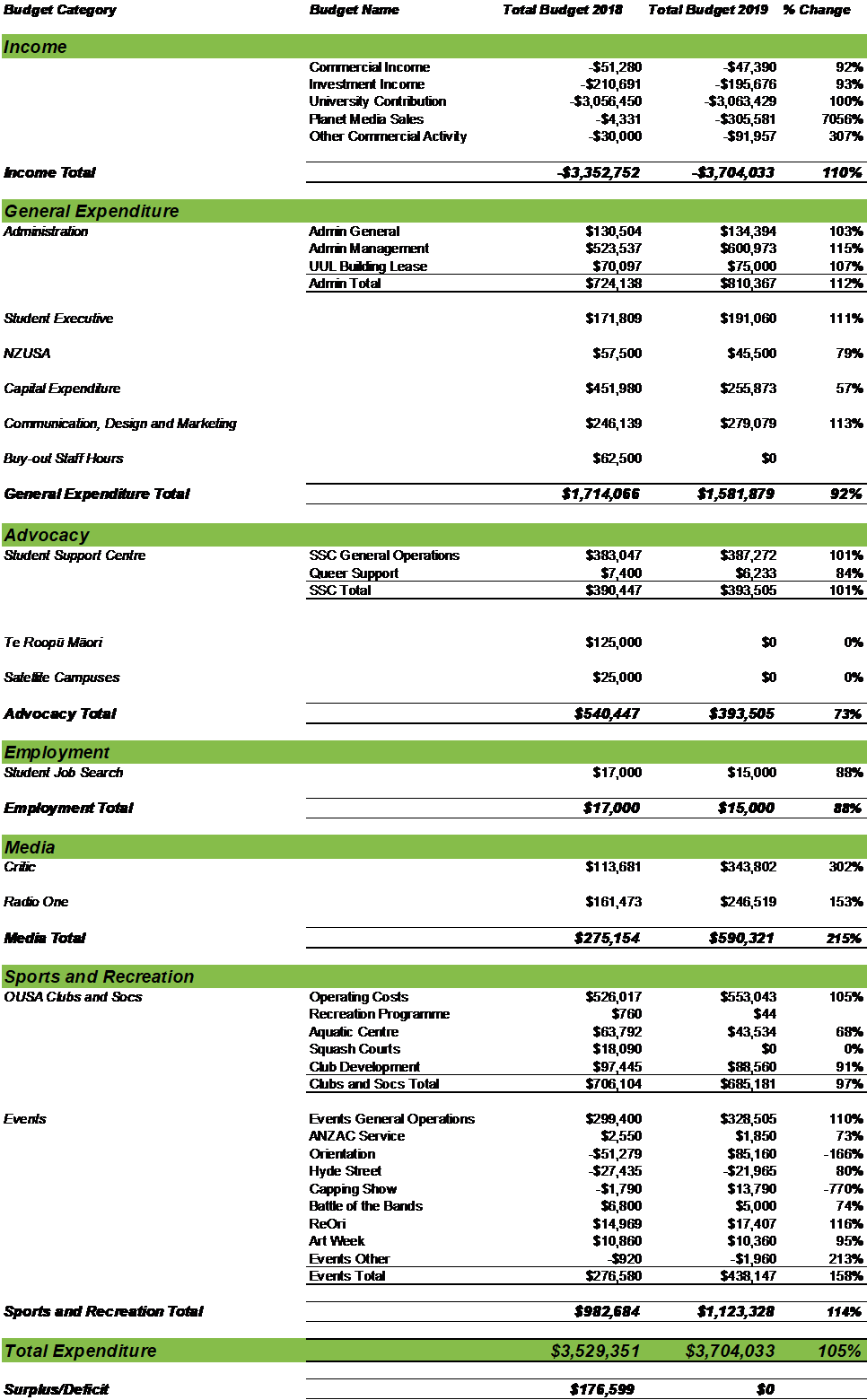 Meeting closed at 9:20am